In Britain post 1945 Michael A’Bear tells us about the how Britain evolved in the period between 1945 and the late 1960s. The talk focuses on the changing political landscape and its results. 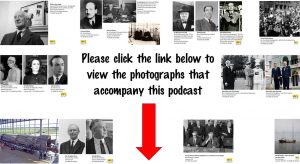 The gallery opens in a new tab. If you wish to enlarge an image please click on the

Beveridge and the Labour Landslide

Britain post 1945 starts with the report published by William Beveridge in November 1942. The foundations of the Welfare State stem from this report. The post-war Labour government implemented many of the proposals.

Although Britain was virtually bankrupt after the war and rationing expanded, the Labour government brought in social reforms including the National Health Service. They also nationalised industries including the mines and the railways.

Attlee’s administration also started to give independence to parts of the Empire although the partition of the Indian sub-continent resulted in a great deal of violence.

Attlee returned with a reduced majority in the 1950 election.

Winston Churchill led the Conservative party to victory in the 1951 General Election. Michael tells us that Anthony Eden expected to take over early in the administration but Churchill seemed reluctant to step down.

Eden became Prime Minister in April 1955 and was victorious in the May 1955 election.

The leader of Egypt, Gamal Abdel Nasser nationalised the Suez Canal in 1956. The British and French governments misread the signals from the US and invaded the area around the canal. Eden snatched defeat from the jaws of victory and this led to Harold Macmillan replacing him.

You’ve never had it so good

Harold Macmillan moved into 10 Downing Street in January 1957. Macmillan created an image of calm and style. The cartoonist Vicky, in the Evening Standard, dubbed him Supermac. Intended as mockery it backfired and Macmillan relished the image.

Macmillan was skilled in foreign relations and was a supporter of decolonisation. He spent much of his time of international issues.

Macmillan won the 1959 General Election with an increase in his majority. This was possibly the high point of his administration.

The economy declined and the balance of payments were in a dire state and Macmillan was losing popularity. Because of this Macmillan fired eight ministers, including the Chancellor of the Exchequer, in his 1962 reshuffle. It is known as the knight of the long knives; because of this the Liberal MP Jeremy Thorpe said ‘greater love hath no man than this, than to lay down his friends for his life’.

The beginning of the end for Supermac.

Out with the old, in with the new

Michael then takes us through the Conservative leadership contest in 1963. Macmillan resigned as he had been diagnosed with prostrate cancer. The grandees of the party selected Alec Douglas Home as his successor. There was a year until the next Election.

Harold Wilson and the Labour party won the election of October 1964 with a small majority.

The 1960s – if you remember them you weren’t there

The talk concludes with a discussion of the Wilson administrations. These took place in a rapidly changing environment with youth coming to the fore. We end in 1968, one of the most revolutionary years since 1848. There was even violence in Grosvenor Square!