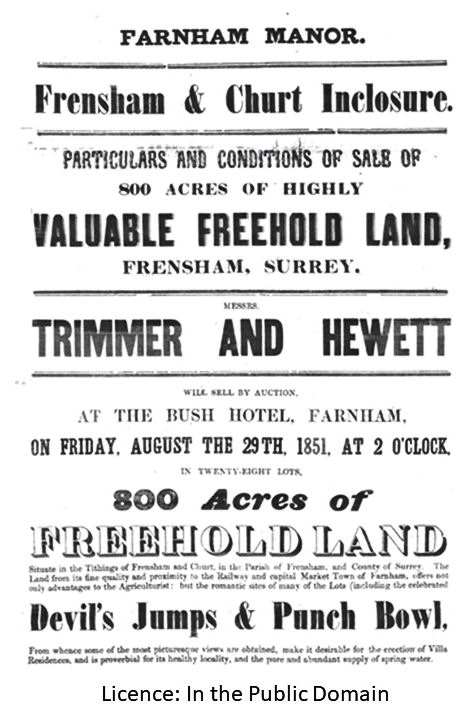 Inclosure – or in today’s spelling Enclosure – is a talk where Gillian Devine tells us about the effects of Inclosure on society. She takes the example of the Inclosure of parts of the Manor of Farnham.

What does ‘Inclosure’ mean?

Inclosure is the process where land that had previously been open to anyone became private property. It includes fencing the land, using walls and hedges to create private estates.

The Board of Agriculture:

In the 1790s the Board of Agriculture sends surveyors out across the country to survey the wasteland, or common land. When they survey Frensham they do not see it as a place where you can make a living through cultivation because their report states that it is sandy soil with loamy spots.

Inclosure requires an act of Parliament. For many years Inclosure proposals from across the country are bundled up in annual Inclosure Parliamentary business.

The owners of one third of the land proposed for enclosure are required before a proposal can be made.

Some of the land proposed  can be sold to cover the costs of the process, because of this 800m acres are offered for sale at an auction in Farnham.

We are lucky that much of the land covered by the Farnham Inclosure is now owned by the National Trust and we can walk across Frensham Common and Ponds, and the Devils Punchbowl at Hindhead. Of course these commons are not common land because the National Trust owns them.

Listen to the podcast and hear Gillian Devine tell the full story the effect on the inhabitants of the Farnham Manor.