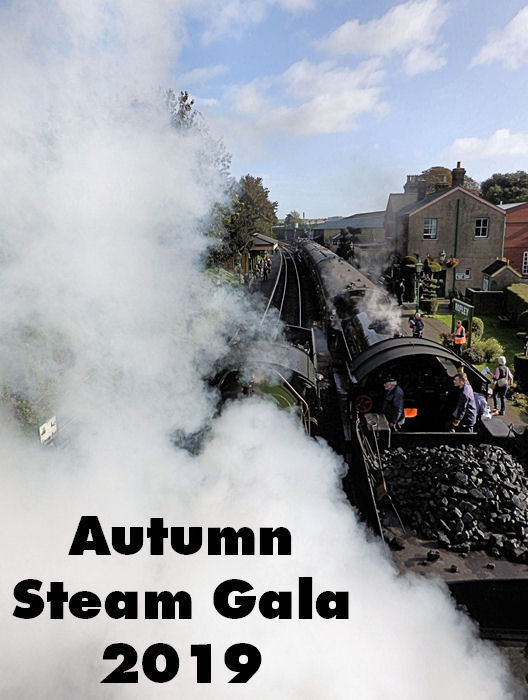 Welcome to The Autumn Steam Gala 2019 where I see some locomotives in pristine condition and talk to people. This is being published in time for the Spring Steam Gala 2021.

To view the photographs that accompany this podcast:

Please click here to open the gallery in another tab.

The Gala takes place on a beautiful Autumn weekend. The railway cannot operate into Alton because a bridge is being replaced. This also means that there is no access to the mainline via the link at Alton Station.

The 2019 Autumn Steam Gala is using the Watercress Line’s fleet of steam locomotives.

The British Rail Class 20 locomotive is doing a sterling job getting the steam locomotives into the right place. It is busily going hither and thither around the Ropley tracks.

D8059 entered service in 1961 and was based at depots in the Sheffield area until British Rail retired it in 1990.

You can find a video of D8059 in action at the Gala here.

Cheltenham is looking magnificent. Freshly painted and sporting the British Railways designation 30925. Cheltenham is a Richard Maunsell design and was built at Eastleigh. They are the most powerful 4-4-0s built in Europe.

The class was withdrawn in 1961 / 62 and three, including the National Rail Museum owned Cheltenham, are at heritage railways.

Robert Urie designed this class for the London and South Western Railway.  The L&SWR also built the Watercress Line.

The locomotive has just come back into service after a long overhaul and this is it’s first Gala Weekend. The paintwork is in the style used by Southern Railway freight locomotives post 1927.

No. 506 first entered service in October 1920 and continued until January 1964. Over a million miles steamed she broke down on her way to Woodham Brothers scrap yard.

7 of the class live on in preservation.

Please consider donating to the Line at this time because over the past year  costs continued but there was very little income. To donate please click here.

Events at the Watercress Line:

You can find out more about the Day Out with Thomas, running from 29th May to the 6th June 2021 by scrolling down on this page.

AKM Music has licensed Steam Railway for use as the theme music.

Joseph McDade has licensed his work Backplate for use as incidental music.