The Merchant Navy class was designed by Oliver Bulleid for the Southern Railway  early in the Second World War. The locomotive brought together many innovations from across the world – some worked well, others didn’t!

Canadian Pacific was the fifth locomotive to be built at the Eastleigh works in 1941 and entered service on 13 January 1942. She worked hard on passenger and freight trains during the war and after the war the Merchant Navy class were used on boat trains to Southampton and on ‘named’ express trains such as the Bournemouth Belle.

The Merchant Navy class were very heavy locomotives weighing 97 tons and  this meant they couldn’t work services past Exeter. A smaller ‘light Pacific’ class (with, for example, smaller boilers) evolved from the Merchant Navy class and retained many of their novel features. Although one type of locomotive they are often referred to as two classes – the West Country class and the Battle of Britain class.

The Merchant Navy locomotives (and the West Country / Battle of Britain locomotives) originally had an ‘air smoothed’ casing resulting in the nickname Spam Cans. This was removed during a major rebuilding programme in the late 1950s where some of the unique features were replaced with more standard designs.

On 15th May 1965 Canadian Pacific, pulling a Bournemouth express, reached 105 m.p.h whilst travelling down Winchester Bank.

Sadly she was withdrawn from service later in 1965. 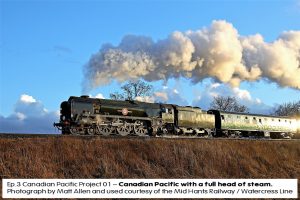 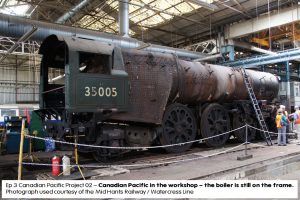 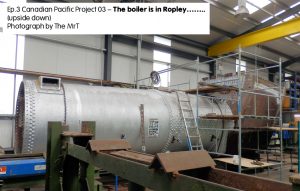 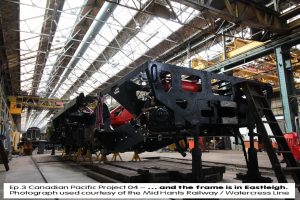 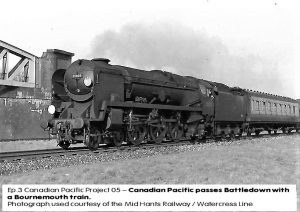 My thanks to Becky for her time and the members of the team at the Watercress Line for making these podcasts possible.

The music Steam Railway used in this podcast is licensed from AKM Music. The recording of the locomotive is from material published by the Watercress Line.